You are here: Home / Crime / Blood on the Tracks

“Nickless’s writing admirably captures the fallout from a war where even survivors are trapped, forever reliving their trauma.” —Kirkus Reviews

“Part mystery, part antiwar story, Nickless’s engrossing first novel, a series launch, introduces Sydney Rose Parnell…Nickless skillfully explores the dehumanizing effects resulting from the unspeakable cruelties of wartime as well as the part played by the loyalty soldiers owe to family and each other under stressful circumstances.” —Publishers Weekly

“An interesting tale…The fast pace will leave you finished in no time. Nickless seamlessly ties everything together with a shocking ending.” —RT Book Reviews 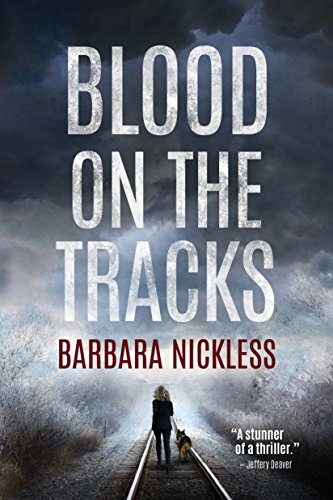 A young woman is found brutally murdered, and the main suspect is the victim’s fiancé, a hideously scarred Iraq War vet known as the Burned Man. But railroad police Special Agent Sydney Rose Parnell, brought in by the Denver Major Crimes unit to help investigate, can’t shake the feeling that larger forces are behind this apparent crime of passion.

In the depths of an icy winter, Parnell and her K9 partner, Clyde―both haunted by their time in Iraq―descend into the underground world of a savage gang of rail riders. There, they uncover a wide-reaching conspiracy and a series of shocking crimes. Crimes that threaten everything Parnell holds dear.

As the search for the truth puts her directly in the path of the killer, Parnell must struggle with a deadly question: Can she fight monsters without becoming one herself?