You are here: Home / Crime / Hunt Them Down

“In Hunt Them Down, Gervais has crafted an intelligent and thoughtful thriller that mixes family dynamics with explosive action…The possibilities are endless in this new series, and this will easily find an enthusiastic audience craving Hunt’s next adventures.” —Associated Press

“Nonstop action meets relentless suspense…The blood flows knee-deep in this one as Gervais uses his background as a drug investigator for the Royal Canadian Mounted Police to bring a gritty authenticity to his latest thriller.” —The Real Book Spy 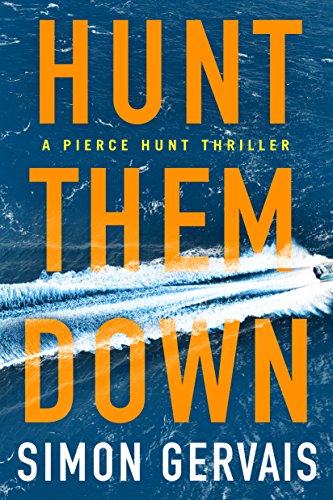 Hunt Them Down (Pierce Hunt Book 1)

“In Hunt Them Down, Gervais has crafted an intelligent and thoughtful thriller that mixes family dynamics with explosive action…The possibilities are endless in this new series, and this will easily find an enthusiastic audience craving Hunt’s next adventures.” —Associated Press

The dark world he’s been fighting against has caught up with him. Will his daughter pay the price?

Former Army Ranger Pierce Hunt is no stranger to violence. Fresh off a six-month suspension, he’s itching to hit a notorious Mexican drug cartel where it hurts, even if that means protecting crime boss Vicente Garcia, a witness in the case against sadistic cartel leader Valentina Mieles. But things spiral out of control when the cartel murders Garcia and kidnaps his granddaughter and an innocent bystander, Hunt’s own teenage daughter.

Mieles wants the new head of the Garcia family on a plate—literally. Hunt has seventy-two hours to deliver, or Mieles will execute the girls live on social media. With the clock ticking, Hunt goes off the grid and teams up with Garcia’s daughter, a former lover and current enemy. To save the girls, Hunt will have to become a man he swore he’d never be again: an avenging killer without limits or mercy.

Simon Gervais was born in Montréal, Québec. He joined the Canadian military as an infantry officer and was commissioned as a second lieutenant in 1997. In 2001, he was recruited by the Royal Canadian Mounted Police and became a federal agent. His first posting was in Toronto, where he served as a drug investigator. During this time, he worked on many international drug-related cases in close collaboration with his American colleagues from the DEA. His career switched gears in 2004, and he was placed with a federal antiterrorism unit based in the Ottawa region. During the following years, he was deployed in several European and Middle Eastern countries. In 2009, he became a close-protection specialist tasked with guarding foreign heads of state visiting Canada. He served on the protection details of Queen Elizabeth II, US president Barack Obama, and Chinese president Hu Jintao, among others. Gervais lives in Ottawa with his wife and two children.