You are here: Home / Crime / Season of the Raven

“In this Medieval mystery of stunning realism, Domning brings the English countryside alive with all the rich detail of a Bosch painting. With well realized characters and a depth of historical detail, she creates a vibrant mystery and a layered, engaging protagonist.  CSI 12th century style.  I can’t wait to see more.”
— Christina Skye, New York Timesbest-selling author of A Highlander for Christmas 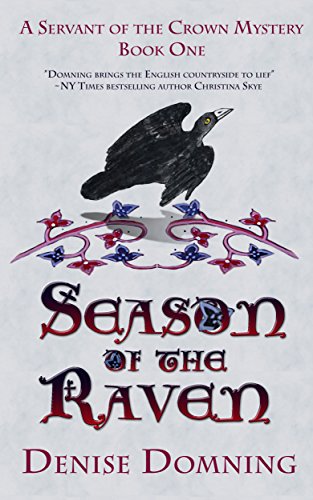 “The author has an encyclopedic knowledge of the social conditions of the time of Richard I and a great eye for the physical aspect of the countryside as it would have appeared then and the influence of monasteries and the Church. I look forward to more stories about Faucon.” ~John Matthews, retired British Coroner

A MILLER FOUND UNDER HIS WHEEL

It’s 1194 and Sir Faucon de Ramis, the shire’s newly appointed Keeper of the Pleas, must do his duty and make an official declaration of the cause of a miller’s death. Saddled with a clerk who names Faucon his ‘penance’, the shire’s first Crowner must thread the tangled relationships between the sheriff, the village of Priors Holston and the priory that once ruled it. As a simple task takes a turn to the political, what seems obvious isn’t and what appears safe turns out to be more dangerous than he could imagine.