A BRITISH COZY TO DIE FOR

With just a hint of the paranormal… 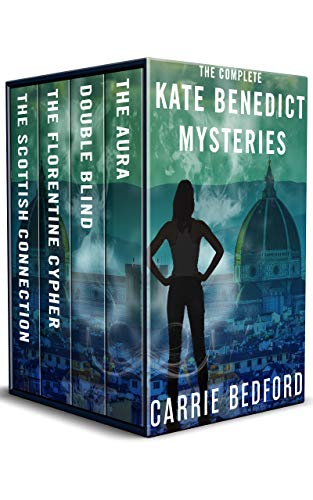 Kate Benedict at first seems a delightfully by-the-book cozy female lead: a successful architect at an elegant firm in rainy London with a penchant for sleuthing, even if it means landing her smack dab in the middle of the wrong place at the wrong time. But she has something else going for her no other genre investigator does—the mysterious ability to see a death-predicting aura over the people around her. And she just can’t help but help them avoid the unthinkable—at all costs.

Now available as one complete box set, this irresistible murder mystery series is sure to be a treat for international suspense armchair travelers that like their cozy female sleuths smart, savvy, and a tad psychic. Think traditional British mystery with a metaphysical twist.

Life spins out of control for Kate Benedict when she sees a dancing aura above certain people’s heads that seems to signal death. Suddenly she’s psychic. But that can’t be! Psychic’s not acceptable in her circle, where the supernatural is strictly for the superstitious. And yet…people are dying. People close to her.

Kate’s tentative attempts to talk about her new-found metaphysical gift are met with eye rolls, so much so that she can’t even tell the nice Scotland Yard detective who’s investigating the death of a close friend, Rebecca Williams. And now Rebecca’s neighbor has an aura.

Two politicians and her best friend have the death-predicting auras London architect Kate Benedict can see despite her most fervent wishes. She’s had the dubious gift for a year now, and suddenly there’s no longer any ignoring it.

But the only way to get to the two pols is via her old friend, DCI Clarke; yet her warnings go unheeded. Her frustration builds when her best friend, Anita, refuses to believe in the auras’ existence as well —even when one appears over Anita’s boss in the hospital where she works. And then Anita develops her own aura.

What began as a quiet Friday night dinner date with an old childhood friend turns into a manhunt when Kate arrives at the rendezvous just in time to find her friend Ethan leaving in a taxi. Kate is alarmed to see the distinctive swirling pattern above his head. When Ethan’s disappearance is followed by a series of cryptic text messages, Kate goes looking for him at his sister’s house in Florence, but it’s immediately clear that whatever danger threatened Ethan in London has followed Kate to Italy—his sister Claire has a matching aura! Soon Kate and Claire are on the run, constantly watched and followed,repeatedly threatened and attacked … never knowing who they can trust.

Kate is off to a glamorous weekend party in Scotland at the formerly grand castle belonging to the uncle of her boyfriend Josh. But the festive occasion turns solemn when Kate notices an aura above the head of Josh’s beloved Uncle Fergus. Blessed – or cursed – with the ability to see auras that indicate that death is imminent, Kate can sometimes avert disaster –if she can discover the source of the danger. Otherwise, Josh’s favorite uncle will die in a matter of days.

Thus is the scene set for a deliciously traditional British cozy with a touch of the paranormal thriller – complete with ghostly characters from the past; the requisite medieval weapons collection; and a creepy, ruined, closed-off wing of the castle. There’s also a vaguely menacing assortment of servants and locals and a castleful of dodgy house guests, all wrapped up in mysterious gloom as thick as the Scottish fog… but warmed by a cozy library fire and a nearly priceless collection of single malt scotches.