You are here: Home / Best Sellers / The Waters of Eternal Youth

“A new Brunetti adventure is always worth celebrating . . . the subtlety and sensitivity with which he approaches his work and his life . . . are on full view here . . . In a marvelous and moving last scene, we glimpse a moment of almost transcendent beauty that makes us realize again how important this series is to our reading lives.”—Booklist (starred review) 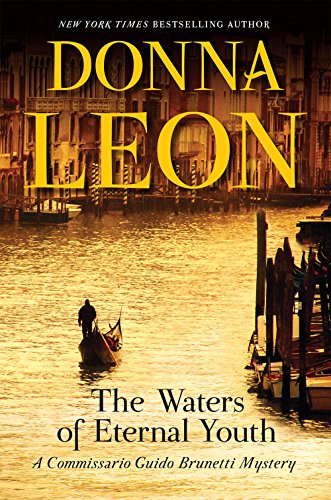 In Donna Leon’s Commissario Guido Brunetti series, the Venetian inspector has been called on to investigate many things, from shocking to petty crimes. But in The Waters of Eternal Youth, the 25th novel in this celebrated series, Brunetti finds himself drawn into a case that may not be a case at all.

Fifteen years ago, a teenage girl fell into a canal late at night. Unable to swim, she went under and started to drown, only surviving thanks to a nearby man, an alcoholic, who heard her splashes and pulled her out, though not before she suffered irreparable brain damage that left her in a state of permanent childhood, unable to learn or mature. The drunk man claimed he saw her thrown into the canal by another man, but the following day he couldn’t remember a thing.

Now, at a fundraising dinner for a Venetian charity, a wealthy and aristocratic patronessthe girl’s grandmotherasks Brunetti if he will investigate. Brunetti’s not sure what to do. If a crime was committed, it would surely have passed the statute of limitations. But out of a mixture of curiosity, pity, and a willingness to fulfill the wishes of a guilt-wracked older woman, who happens to be his mother-in-law’s best friend, he agrees.

Brunetti soon finds himself unable to let the case rest, if indeed there is a case. Awash in the rhythms and concerns of contemporary Venetian life, from historical preservation, to housing, to new waves of African migrants, and the haunting story of a woman trapped in a damaged perpetual childhood, The Waters of Eternal Youth is another wonderful addition to this series.