You are here: Home / Mystery / THE WINTER MYSTERY 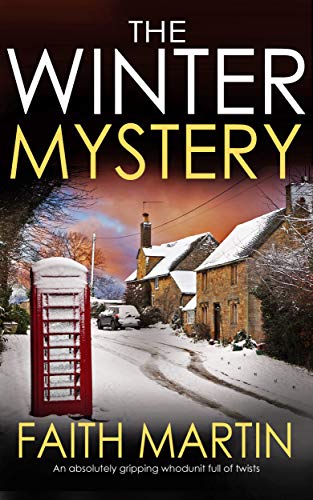 THE WINTER MYSTERY an absolutely gripping whodunit full of twists

Discover a new series of whodunits by million-selling author Faith Martin. These charming mysteries will have you scratching your head to work out who the murderer is.

Please note this book was first published as “A FATAL FALL OF SNOW” under Faith Martin’s pen name JOYCE CATO.

Jenny Starling is spending Christmas in a snowed-in country house cooking all the traditional food she loves. But the family she’s working for are not full of the seasonal spirit. In fact, they seem to hate each other.

On Christmas Eve, someone is found dead on the kitchen table. And the head of the family is blaming Jenny!

But with an incompetent detective called in, and seemingly no motive for the murder, Jenny will have to give the police a hand.

She will stop at nothing to clear her name and find the real murderer.

This is the second of a series of gripping murder mysteries with a great cast of characters and baffling crimes which will keep you in suspense to the final page.

What readers are saying about THE WINTER MYSTERY

“Jenny is an attractive, intelligent Rubenesque heroine, and the cast of characters above and below stairs are captured affectionately and wittily.” EuroCrime

THE SETTING
A snowed-in farmhouse in rural Oxford. A big Cotswold-stone Georgian house with stables, outhouses, cobbled courtyard and resident sheepdog. Charming, but cold and uncomfortable in winter.

JENNY STARLING
In her late twenties, Jenny Starling is an impressive woman. Physically, she stands at 6ft 1inch, and has shoulder-length black hair and blue eyes. Curvaceous and sexy, she’s a modern single woman, living the lifestyle that suits her – that of a travelling cook. Her famous (and now very rich) father, is a ‘celebrity’ cook, divorced from Jenny’s mother. Jenny drives a disreputable cherry-red van, and is happy travelling the country catering events and cooking great food. She is on a one-woman crusade to bring back ‘real’ food. And definitely doesn’t like having to divert her attention from achieving the perfect Dundee cake or creating a new sauce recipe by having to solve a murder. She finds crime very distracting, especially when there is chocolate to temper or pike to poach. Nevertheless, she is very good at reading people, and with a quick and agile brain, becomes very good at unmasking killers. And her always-undaunted sense of humour goes a long way in keeping her sane when all around her people are dropping like flies.

THE AUTHOR
FAITH MARTIN is the best-selling author of the DETECTIVE HILLARY GREENE mysteries, which have sold over 1 million copies globally in just over a year.

More JENNY STARLING mysteries coming soon. Join the Joffe Books mailing list to be the first to hear about the next in the series.