You are here: Home / Crime / Truth and Lies

“With her police officer experience, Caroline Mitchell is a thriller writer who knows how to deliver on plot, character and, most importantly, emotion, in any book she writes.” —My Weekly

“This book had everything—an excellent police procedural with tension, pace, and compelling storyline but with the added psychological element. I was captivated from the very first word.” —Angela Marsons, author of the D.I. Kim Stone series 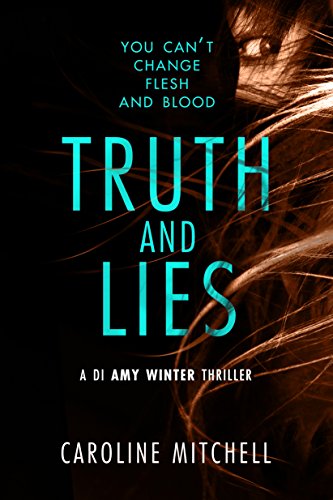 DI Amy Winter is hoping to follow in the footsteps of her highly respected police officer father. But when a letter arrives from the prison cell of Lillian Grimes, one half of a notorious husband-and-wife serial-killer team, it contains a revelation that will tear her life apart.

Responsible for a string of heinous killings decades ago, Lillian is pure evil. A psychopathic murderer. And Amy’s biological mother. Now, she is ready to reveal the location of three of her victims—but only if Amy plays along with her twisted game.

While her fellow detectives frantically search for a young girl taken from her mother’s doorstep, Amy must confront her own dark past. Haunted by blurred memories of a sister who sacrificed herself to save her, Amy faces a race against time to uncover the missing bodies.

But what if, from behind bars, Grimes has been pulling the strings even tighter than Amy thought? And can she overcome her demons to prevent another murder?

She has worked in CID and specialised in roles dealing with the vulnerable victims—high-risk victims of domestic abuse and serious sexual offences. The mental strength shown by the victims of these crimes is a constant source of inspiration to her, and Mitchell combines their tenacity with her knowledge of police procedure to create tense psychological thrillers.

Originally from Ireland, she now lives in a pretty village on the coast of Essex with her husband and three children.